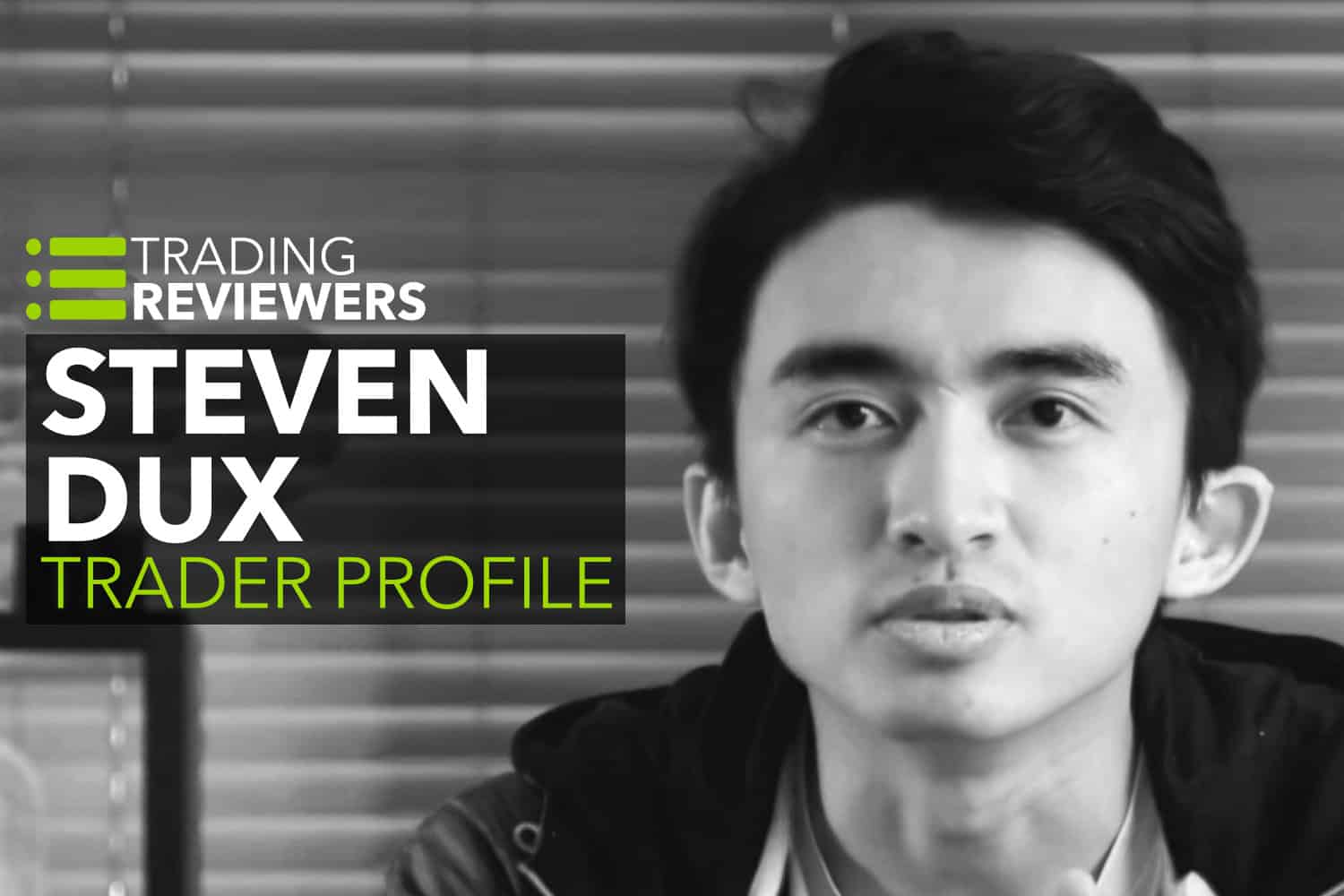 A young trader who has quickly emerged as one of the best day traders in the world, Steven Dux has mastered the art of selling short low float stocks, growing his net worth into the millions of dollars in just a few short years… 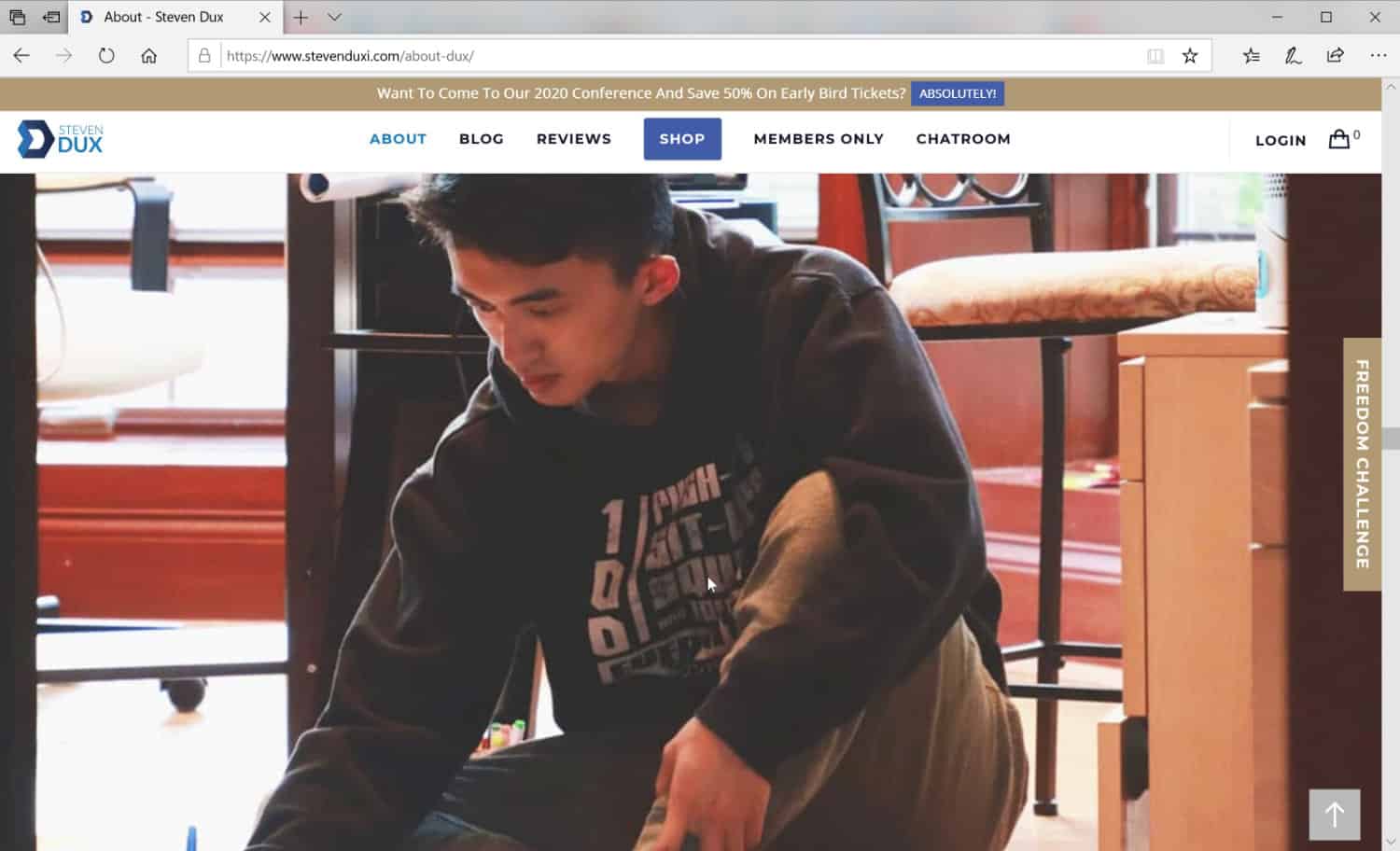 Steven Dux (Xiuxan Du) was born into a poor household in China. His hard-working mother raised him by herself and he only saw his father once a month when he was on weekend leave from the military. As Steven grew up, he watched and admired his mother’s dedication and commitment to make a better life for her family.

In the beginning, his mother worked long hours and saved enough money over time to be able to start her own shoe business. The shoe business did so well that she was able to expand into hotels, retail, and restaurants. As she became more and more successful, she made a name for herself and everyone knew her around town.

When Dux was ten years old, his father returned home, and his parents soon had another son. His mother decided to sell most of her businesses to raise her children. She gave the money she made to her husband to invest in real estate, a fast-growing market at that time. He was hugely successful and made approximately $300 million.

*Exclusive Special Offer Become a member of the hottest online day trading community. Click here and use promo code tradingreviewers to save up to $500 on Investors Underground quarterly and annual memberships.

At that time, his family life and school life became more difficult for Dux. His analytical mind caused him to question the rules set by his Asian schools. Because of this, his teachers told the other parents about him, who, in turn, warned their children to stay away from Dux and the possible bad example he might set for them.

It wasn’t that he was terrible in school, there were subjects he did very well in, such as Chemistry and Physics. He did do poorly in Math and English, mainly because he didn’t enjoy them the way he did the others. Despite having built an amazing garbage can with his friends that automatically recognized whether the trash was recyclable, the adults didn’t care about it because it didn’t make any money. Dux became more and more frustrated with his life. 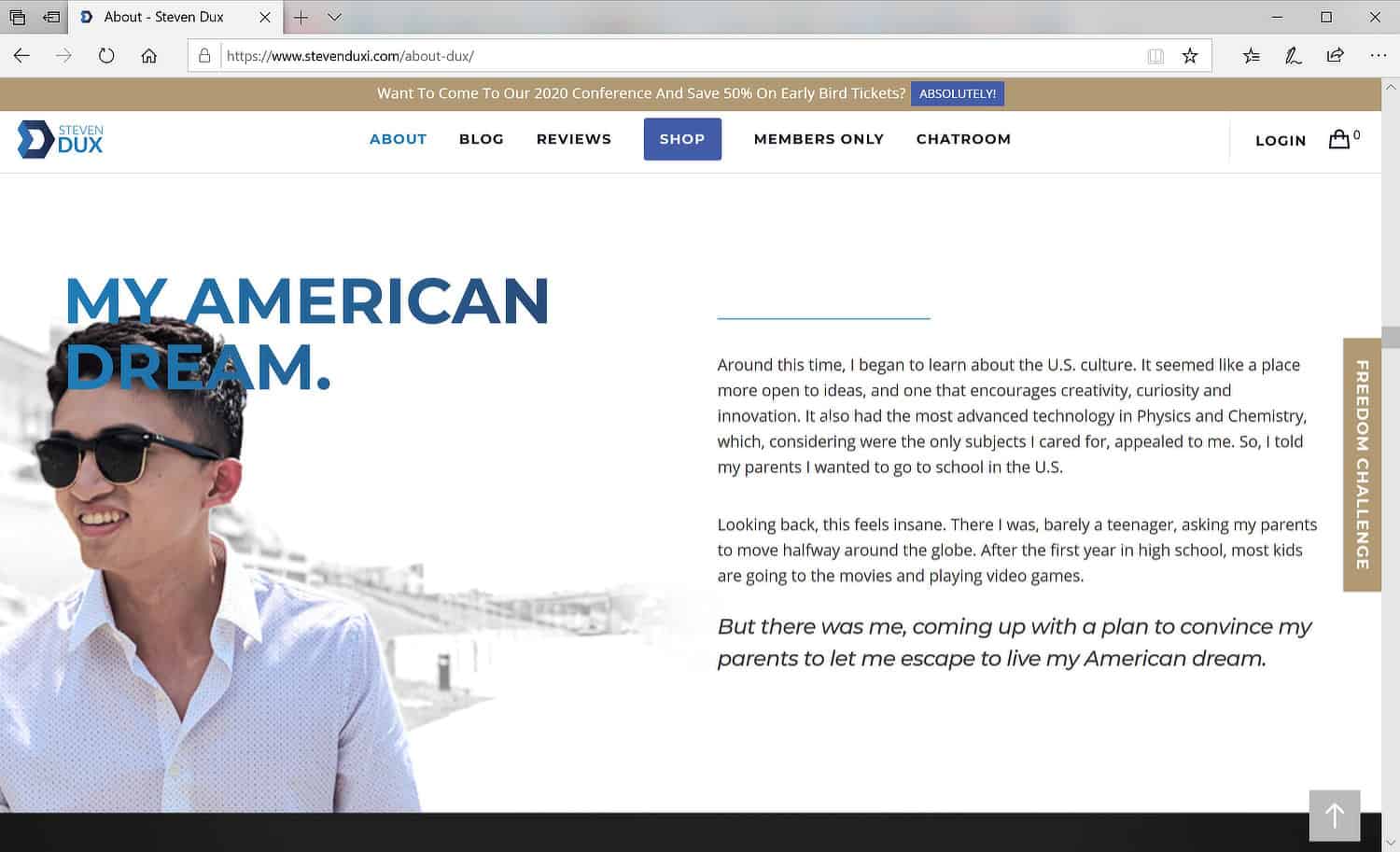 It was around this time that he began learning about the United States and went to his parents and told them that he wanted to go to school in the United States. “I just had to escape,” he said, “And the only place I wanted to escape to was the U.S.” Luckily, his mother had a friend who lived in Cincinnati, Ohio, who agreed to take him in. Otherwise, his mother never would have gone along with his wishes.

His high school years were a success, and he adapted to the American culture quickly. During high school, he discovered his love for engineering. “It had become clear since moving to the U.S. that engineering was the major for me,” Dux said, “I liked how it encouraged my curiosity and allowed me to ask questions and figure out new solutions. The whole purpose of engineering is to find the most efficient solution. This came naturally to me.”

He decided to stay in the states and go to the University of Cincinnati and get his engineering degree. However, his University experience didn’t live up to his expectations. His life revolved around his classes and his tedious job as a night doorman for his dorm. Because of this, his frustration returned once again.

Dux wanted to show everyone that he could be successful like his mother had been. He reached inside himself and found the same resilience and strength his mother had when she built her businesses from scratch. He studied harder and began working out. 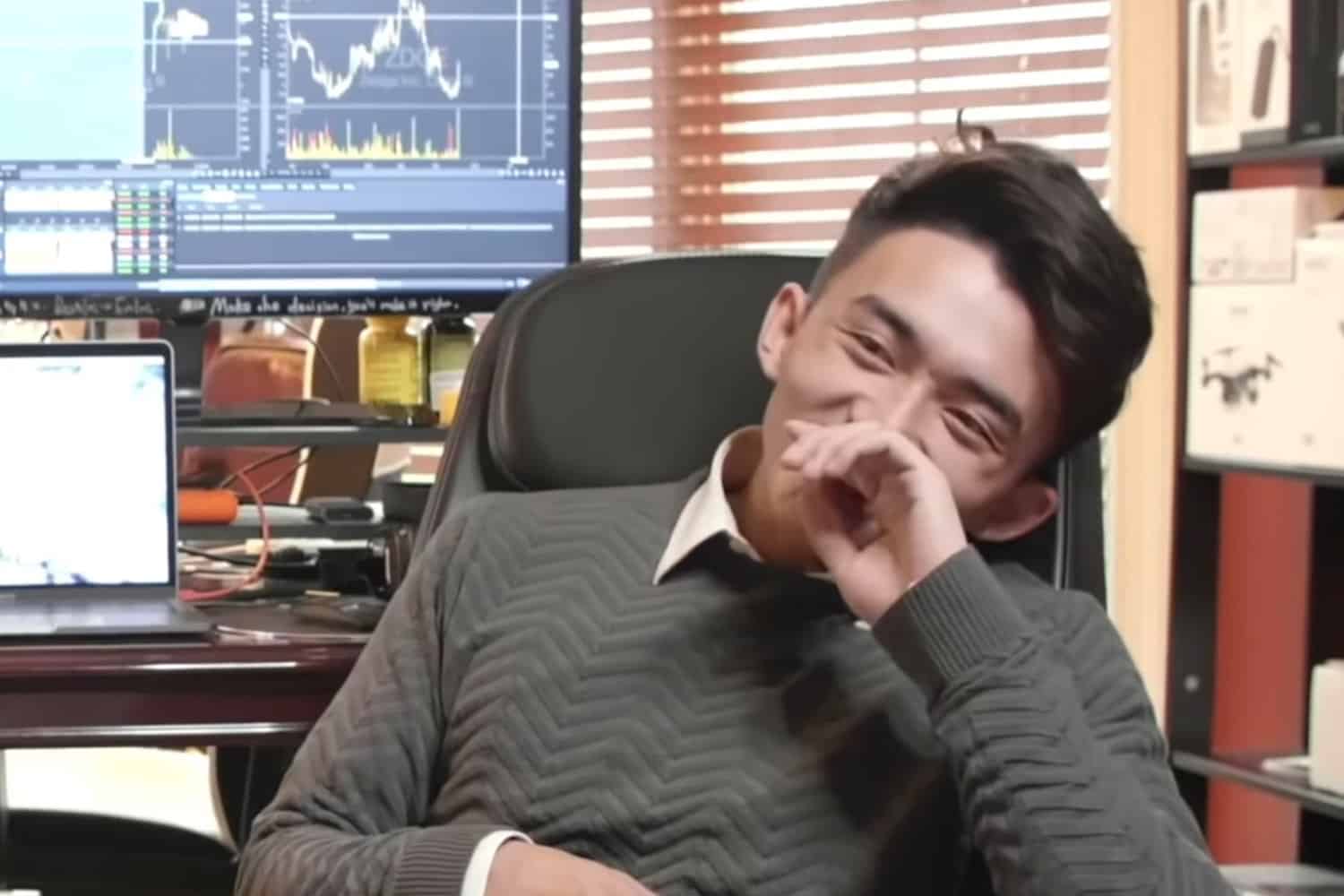 Around that time, Dux found his passion for trading stocks. His night job was perfect for learning everything he could about his new love. He had the ideal personality for trading stocks, and his analytical mind was put to good use. “It encouraged experimentation and questioning everything. If this works, why? If this doesn’t work, what could I have done better? Each strategy or system I consumed led me to another. I found myself lost down a rabbit hole, discovering new insights and skills every day. My engineering background was put to good use.” Dux said.

However, his father did not approve and stopped paying his tuition. Dux wanted to prove that he could do it, so he worked hard to save $500, which he invested and made a $300 profit on. Knowing it would infuriate his father, Dux decided to invest his entire $27,000 tuition in penny stocks. Unfortunately, he quickly lost half of it, and fear and self-doubt consumed him.

He borrowed $10,000 from a friend, promising to pay her 50/50 on whatever profit he made. After learning from Timothy Sykes and Tim Grittani through their Pennystocking Framework and Trading Tickers courses, Dux got his first taste of success as he turned his $27,000 into $60,000 in one month and paid his friend back as promised. He then went on to grow his account into $900,000 over the next nine months. After a few more months, it grew to $1.3 million, and over the next couple of years, it grew to $4.2 million.

Well-known for meticulously tracking setup patterns and trade statistics through the use of spreadsheets, Dux’s hard work has paid off by giving him a significant edge in the markets. His favorite chart patterns include first red day, dip buying huge panics, and shorting spikes.

“As an engineer, you strive to make something as efficient as possible. That’s it,” Dux remarked, “My engineering background showed me how to invest because all I cared about was finding the most efficient solution.” 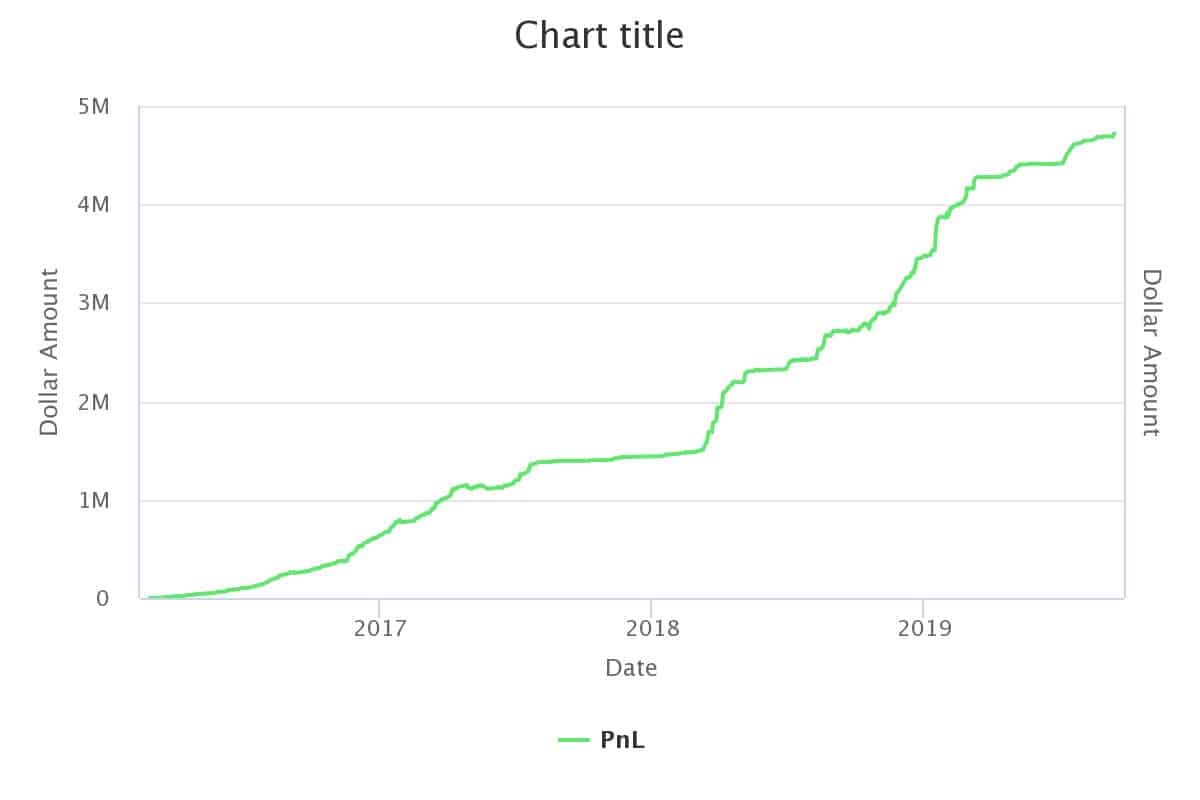 If you want to keep tabs on his trading performance, you’ll find Steven Dux on Profitly where he has quickly climbed to the top of the community’s leaderboards, logging $5.1 million in verified trading profits.

At the moment, he’s currently ranked:

Although his friends suggested he move to New York and start an investment firm, Dux decided to take everything he learned, condense it to make it more efficient, and teach others his methods and strategies. The Freedom Challenge was born. Additionally, StevenDuxi.com also offers the following educational resources for traders:

To date, thousands have discovered him on Twitter, Instagram, and YouTube and enrolled in his courses. Some students have become extraordinarily successful and gone on to make seven figures, while many others make six figures.

“Making the money I did didn’t make me happy.” Dux struggled his whole life with anger and the need to prove himself. Even during the most prosperous time in his life, he suffered from dissatisfaction and health issues. It wasn’t until Dux stepped back, put it all into perspective, and decided to start teaching that he finally felt that he had succeeded in life. Now he travels the country teaching and enjoying life, the ocean, and surfing.